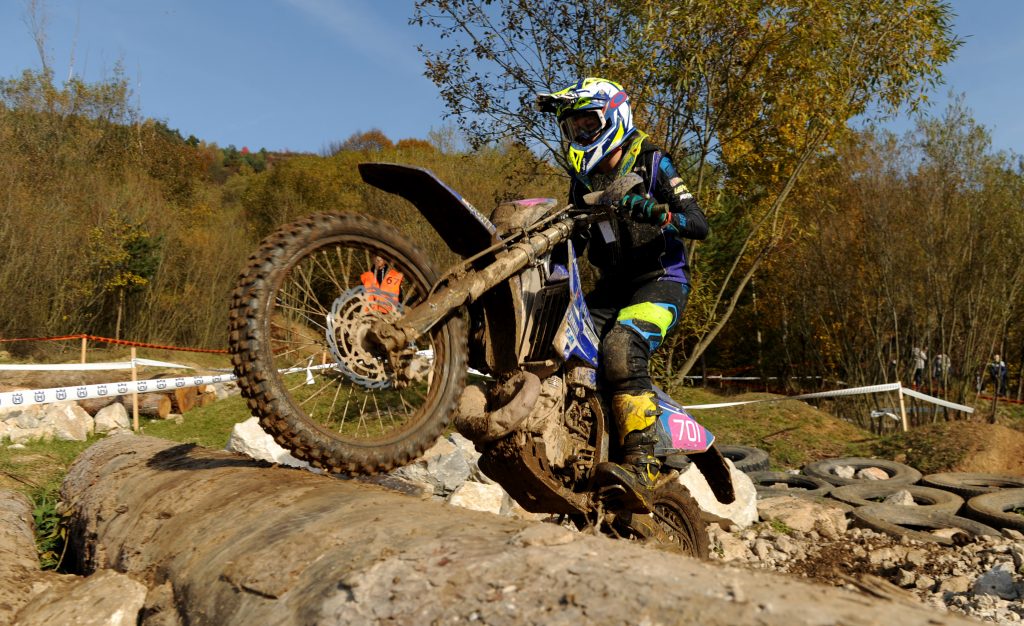 Australians Jess Gardiner has continued to create history in her stellar motorcycle racing career, this time winning the 2017 FIM Enduro European Championship which she now adds to her Championnat de France d’enduro championship, which she locked up two weeks ago.

The fourth and final round of the Enduro European Championship headed to Gelnica in Slovakia, which is one hour from where the 2015 International Six Days Enduro (ISDE) was held in Kosice.

The cross tests at Gelnica was almost a complete replica, but is in reverse as what Gardiner rode at the ISDE two years ago.

Even before the final round got underway for the 24-year-old, a major blow happened when Gardiner’s Yamaha WR250F were stolen out of her van by what she explained as professional group of Eastern European thieves.

“I hope them ‘buggers’ are having as much fun on my bikes as I did.”

However, thanks to the French Army team, they came to rescue at the eleventh hour by lending Gardiner a Yamaha YZ250, which is the first time she had ridden a 250 two stroke. In fact, it was nine years ago when Gardiner last rode a Yamaha YZ125, which she only rode for six months, before switching over to the four stroke band wagon.

“I’m heartbroken to say the least. However, I will just continue pushing on throughout this weekend and hopefully we can lock up the championship. I can’t thank the French Army team enough for all their help by supplying me a bike for this weekend.”

Day one of competition on Friday saw Gardiner leaving her rivals in her wake around the 180km challenging off-road course.

Gardiner, who was not only having to learn a complete new type of motorcycle, but she was also still slightly hampered by her left scapula, which she broke at Réquista at the fourth round of the Championnat de France d’enduro.

However, Gardiner managed to beat Hanna Berzelius by 3min10.66, even after being handed a one minute penalty in one of the tight sections.

“The trials were really tight,” expressed Gardiner who finished the day with a total time of 47min47.96.

“I never had more than two minutes at most controls, so I was a bit hungry though out the day as it was always go. Main thing is, the French Army team and I managed to join all the dots together today which puts us in a good position to win the championship tomorrow.”

It was another dominant performance on the second day, which saw Gardiner riding to a total time of 48min59.96, again beating Berzelius. The race victory was good enough to see Gardiner locking up the title and becoming the first Australian to win the FIM Enduro European Championship.

Gardiner explained that she had much more enjoyable time piloting the Yamaha YZ250 around, as she managed to get more used to the different ‘engine characteristics’ compared to her Yamaha WR250F.

“I definitely didn’t miss any power getting up any of the hills,” joked Gardiner after the completion of day two.

The final day of ‘school’ saw Gardiner once again dismantling her rivals on a 20km trial ride, followed by a seven lap motocross race.

Gardiner was quick out of the blocks by snaring the holeshot and lead from the start all the way to the checkered flag, beating Nina Klink by 15.83 seconds and stamping her authority on what has been a solid year.

“It was a lot fun out there,” beamed Gardiner.

“In fact, it was probably the most enjoyable race I have had in a while, whilst racing here in Europe. Today has just capped off a perfect season in the European Championship. The round win and the championship is a fantastic way to say thanks to the French Army team and the FFM (Fédération Française de Motocyclisme), as well as Nico [Darnis] from the Ridercamp enduro team for everything they have done for me this weekend, after my bike was stolen.

Also a special thanks to Yamaha Motor Australia (YMA) and all my European and Australian sponsors for making this year all piece together. I need to also add a huge thank you to my work, JK Williams for being 100% behind me this year. The biggest thank you going to Leigh Hartog for allowing me to chase my dreams and know I safely have a job to come home too. To everyone involved within the company for always being so supportive and right behind my sportive career.”

Gardiner also made mention to French Yamaha motorcycle dealership Philip’motos in Saint-Étienne for being a major sponsor of hers throughout the 2017 season. Philip’motos this year have supplied Gardiner with one bike to race most of the season, which she expressed as a massive help.

“I would also like to thank my amazing family and friends who have done all they could to make me be able to spend this season in Europe. It’s not easy on them, but they have all stuck behind me and I can’t thank them enough. This championship is there’s as much as it is mine,” concluded Gardiner.