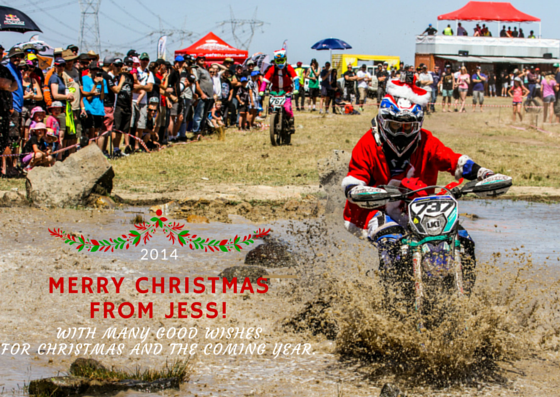 This year really has flown by and already I’m full speed into 2015.  I fly to France on Boxing Day for a month to get in some training in the European winter and then back to Oz for the EnduroX series. Thank you to everyone who had a part in making 2014 a most amazing […] 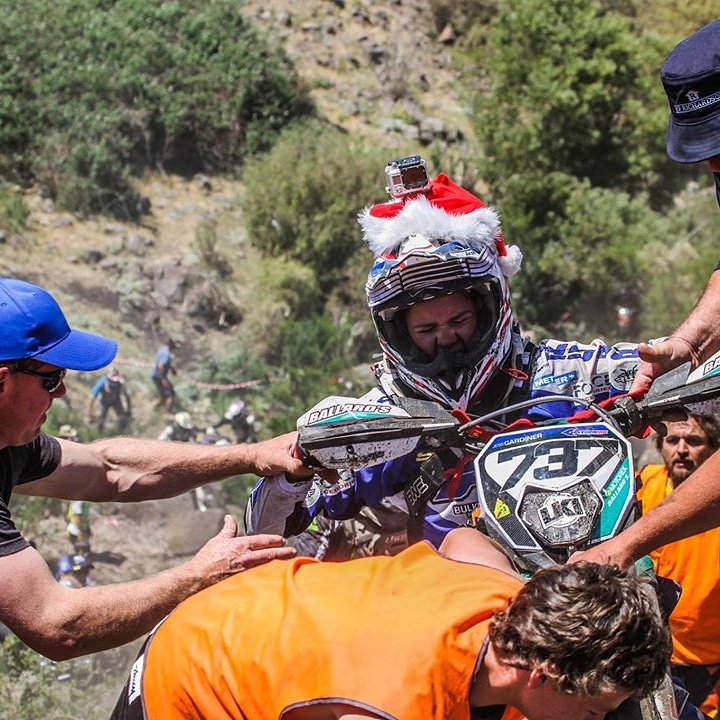 This year’s Wildwood Extreme Enduro was my 3rd attempt at the race.  I had DNFed the previous 2 years so my goal for this year was to at least finish the event! It has become a tradition between my good friend Kristie McKinnon and me, to dress up in some sort of costume for the […] 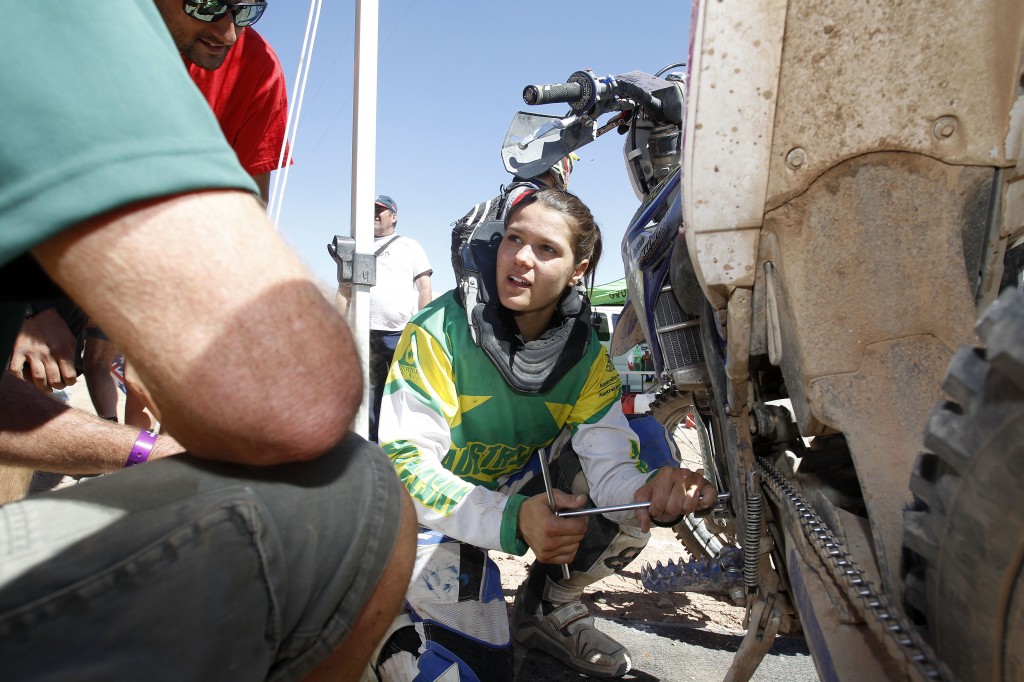 This year I was able to spend the month leading up to the ISDE training in France. I caught up with Team Australia in San Juan, Argentina the week before the event. We used the time to walk the special tests and commit them to memory. It was pretty uncomfortable wandering around, it was such […] 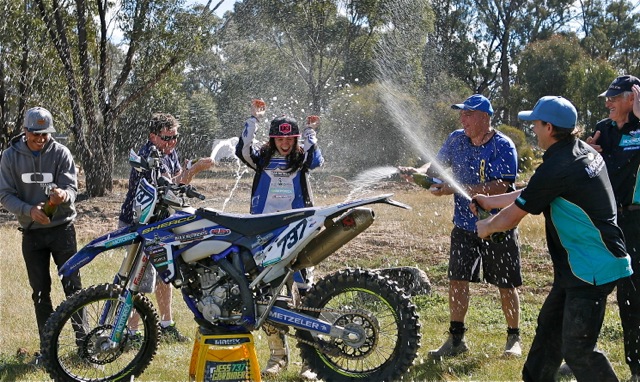 Sherco, Ballards Motorex off-road rider, Jess Gardiner struck a different type of gold in Bendigo over the weekend taking out the women’s crown in the Australian Off-Road Championships (AORC). The 21 year old from Londonderry NSW, reclaimed her title finishing comfortably on 291 points from Emelie Karlsson (243) in second and Tayla Jones (242) in […] 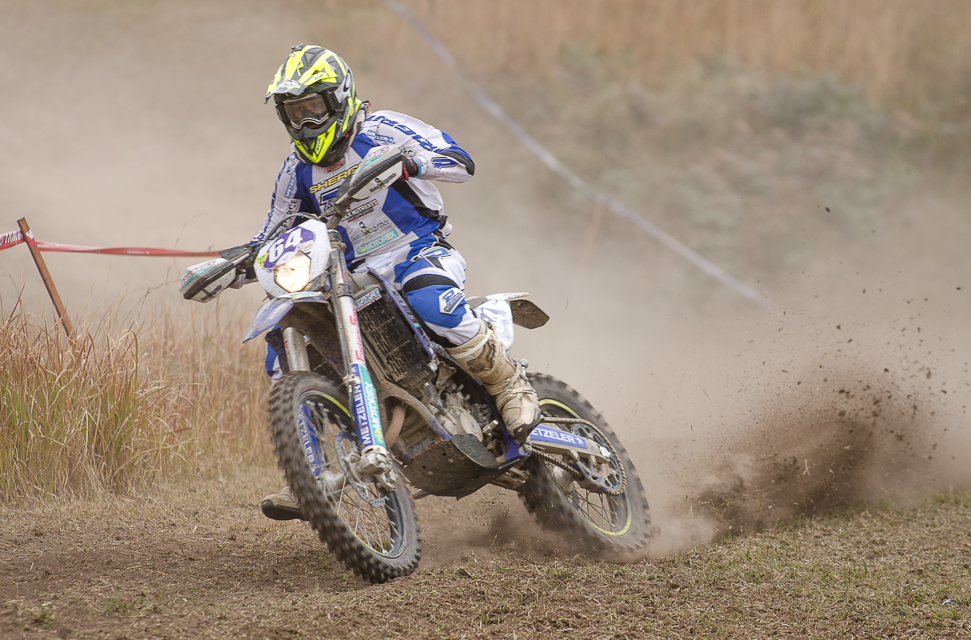 Sherco, Ballards Motorex off-road rider, Jess Gardiner has claimed her fourth Australian Four Day Enduro (A4DE) women’s title taking out top honours with a total time of 2h55:03.238. The 21 year old from Londonderry NSW, said it was extremely close between her and ISDE team mate Tayla Jones but was happy she managed to bring […] 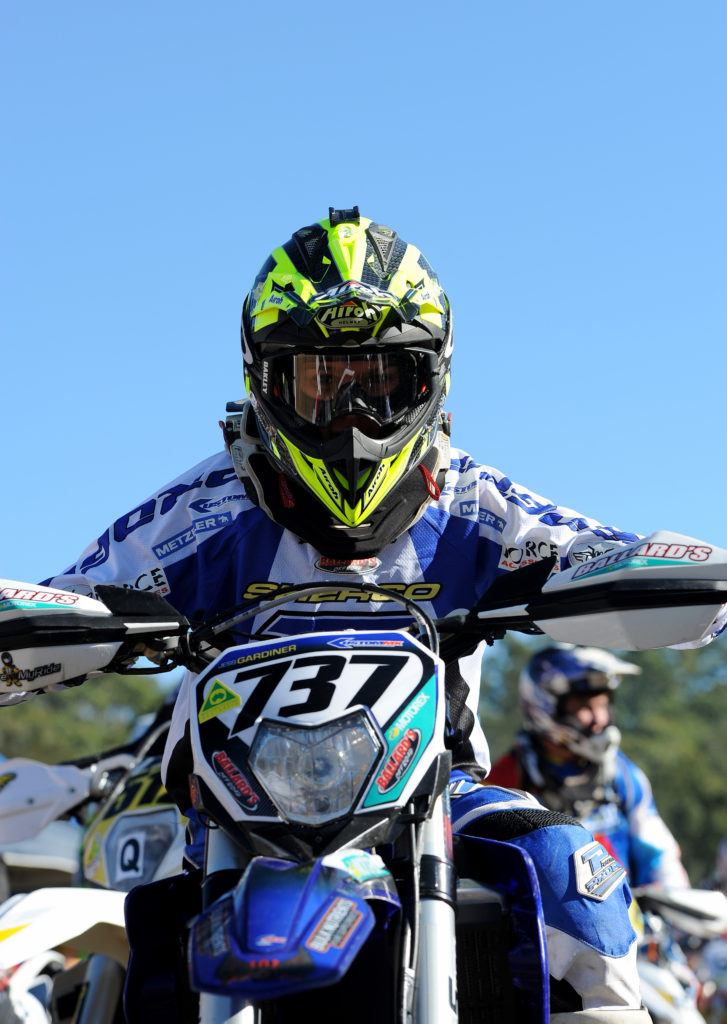 Sherco Press Release: Sherco, Ballards Motorex off-road rider, Jess Gardiner is eyeing off her fourth Australian Four Day Enduro (A4DE) title this year saying she is fit, fast and focused leading into the event. The 21 year old pocket rocket from Londonderry NSW, has been pushing her Sherco 300 in training and will be charging […] 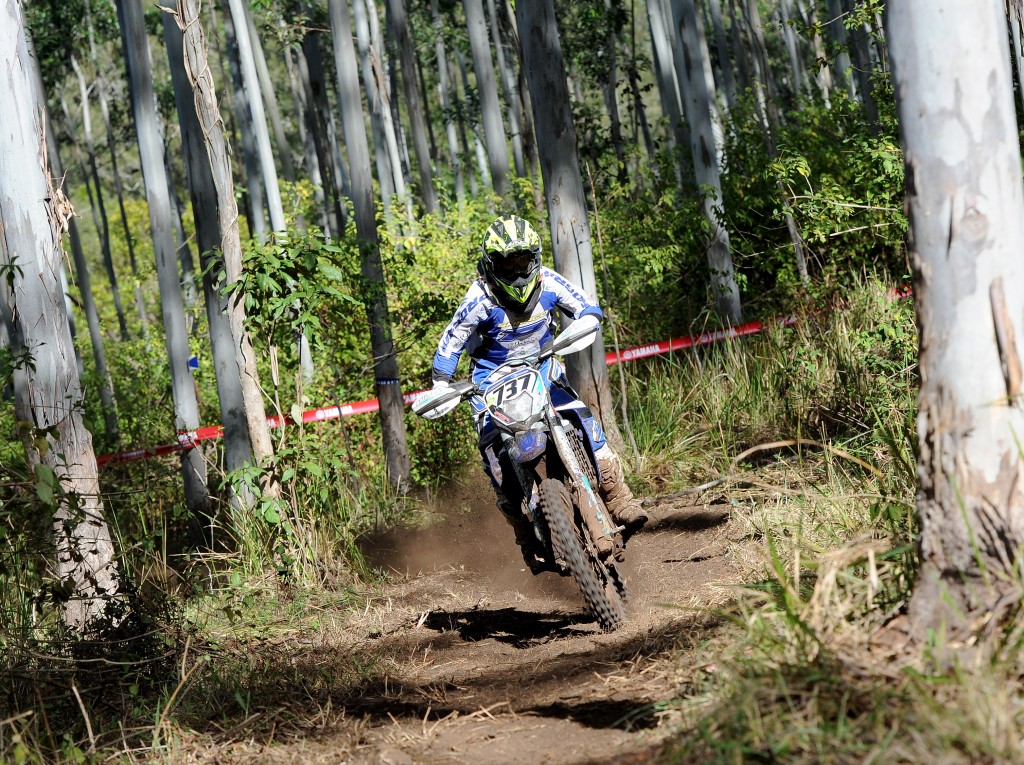 Sherco, Ballards Motorex off-road rider, Jess Gardiner extended her championship lead at the Australian Off-Road Championships (AORC) in Kyogle, NSW on the weekend, winning both rounds and locking in valuable points. Gardiner fought hard to take the win in round nine holding off fellow ISDE team member, Tayla Jones to cross the finish line a […] 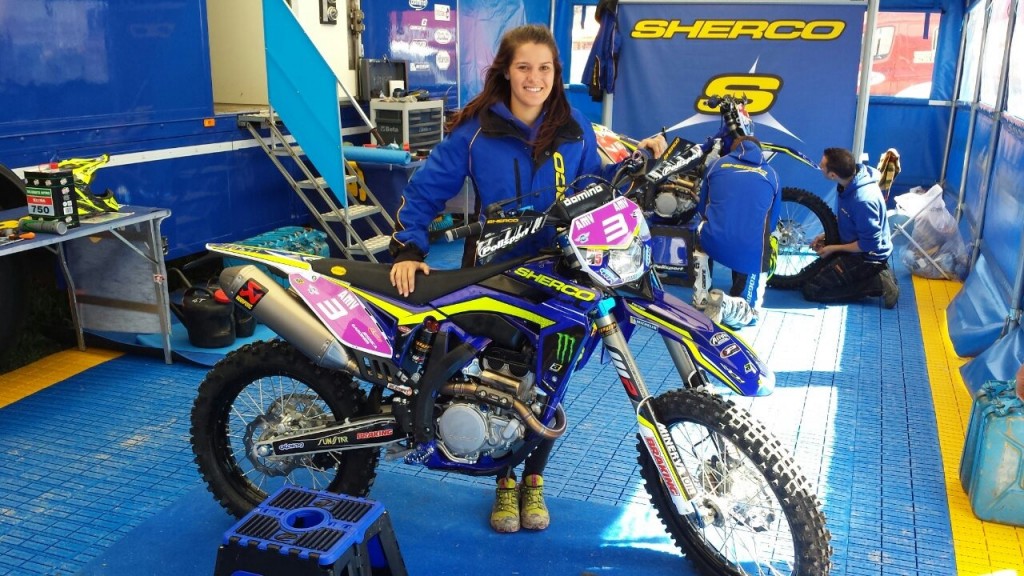 In 2014, I am officially riding for the Sherco CH racing team managed by Fabrizio Azzalin. My teammates are Lorenzo Santolino and Matti Seistola. All the mechanics and team as a whole are very motivated, determined and professional. I feel very comfortable with the new Italian team! I will continue to ride the Sherco 300cc […] 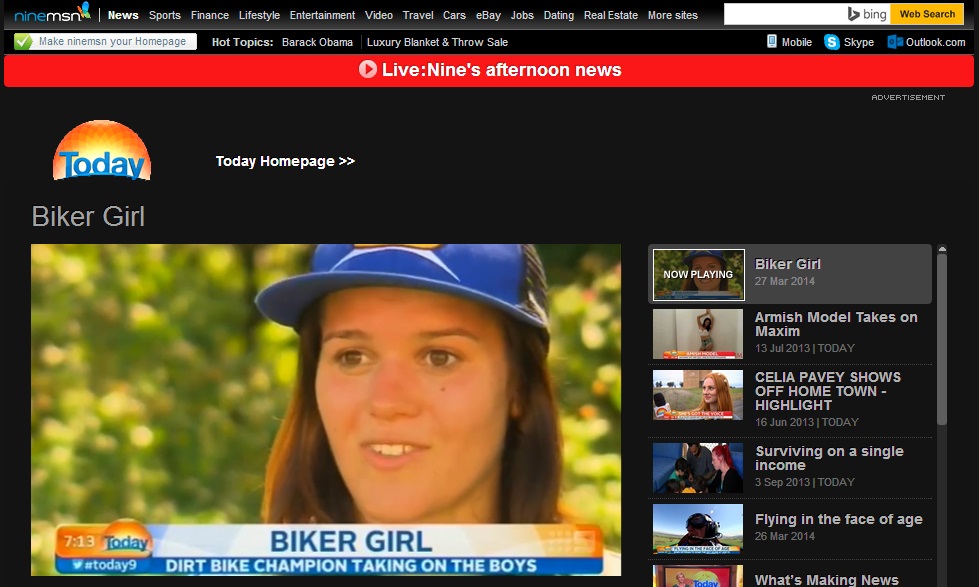 Jess was interviewed for Channel 9’s TODAY show over the weekend – you can see the segment here http://today.ninemsn.com.au/videoindex.aspx

Kicking some goals with Indiegogo! 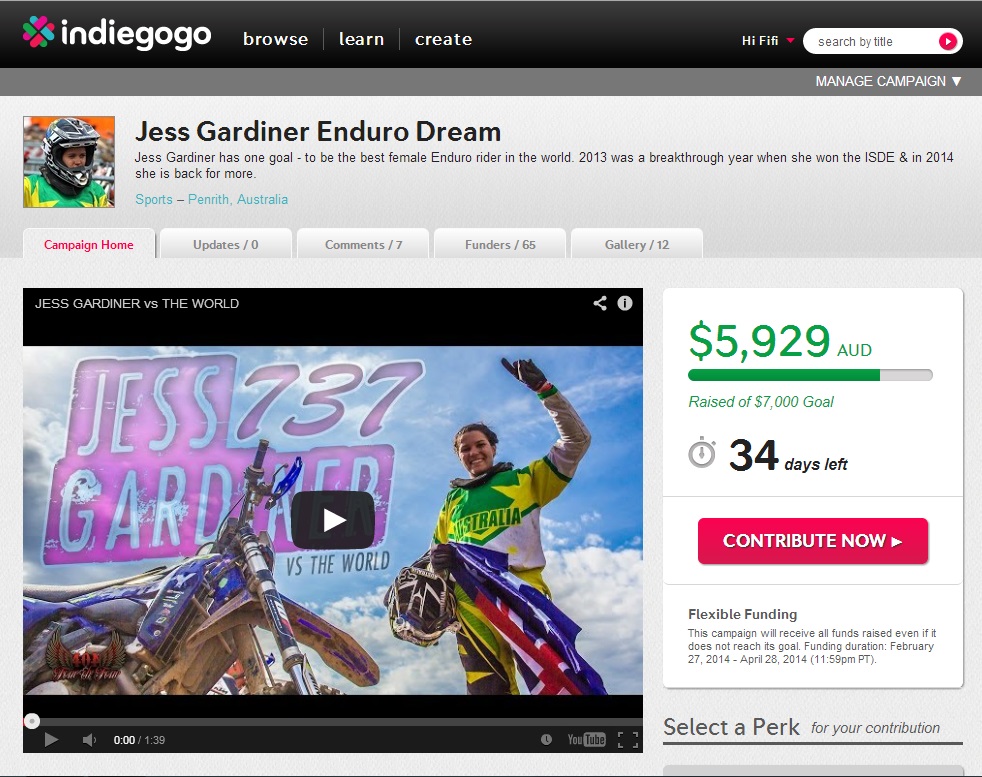 There is still a month to go but the Indiegogo campaign is over 80% funded. This is an awesome way for Jess to start the racing year. You can still contribute and choose from perks like a RIDE DVD, a postcard from Europe, a subscription to Dirt Action magazine, a trail ride with KTM […]