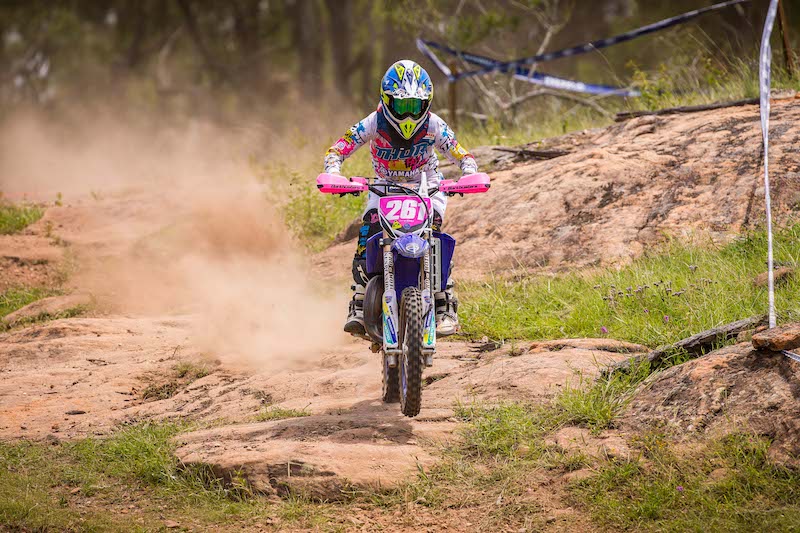 The Yamaha MXstore Ballards Offroad Team was in Toowoomba, QLD over the weekend for Rnd1/2 of the Australian Offroad Championships (AORC). The weather was on great with lots of rain in the lead up to the eventand clear skies over the weekend.

The team riders, Jess, Jeremy and Danielle were present at the local primary on Friday morning to present 270 kids with signed posters and talk to them about motorcycling/enduro. The nerves were high for all riders as they went into Saturdays racing after 4 months without riding against the other competitors. The blucru presence was very strong and the team had all their new gear on display.

Jess Gardiner came out full swing on Saturday for round 1, winning every test in the Women’s category on her WR250F. Claiming the day victory over Emelie Karlsson for 1 minute and 49 seconds. Gardiner stated, “ I really enjoyed the special tests today as it was more technical and suited my riding style. My new 2020 WR250F didn’t miss a bit and I’m really impressed with this new bike’s performance’.

Jeremy Carpentier piloted his WR450F to a hard earned 12th outright on the Pro track (separate to the track Gardiner raced) and 8th in the stacked E2 category. A big crash in the 1st sprint and damaging a gear lever resulted in Jeremy playing catch up for the remainder of the day. Jeremy said, “ I really struggled on the track today as it was really high speed and with a few annoying injuries over the offseason, I definitely missed some bike fitness.”

The newest member of the team, Danielle McDonald had a flying start to her first National event. Dominating the Junior Girls category to win every test and secure her first win in AORC. Danielle finished an incredible 23rd outright on the junior track. If she were allowed to enter the boys’ category Danielle would have wrapped up 2nd in the J2 category also!

The team prepared for Sundays competition that afternoon with mechanics Steve and Josh preparing bikes, the riders walked the special tests. The seniors switched tracks for Sunday and the junior circuit was extended.

Jess Gardiner kept up her fine form on Sundays track with another impressive win in the Women’s category. Gardiner took home 5/6 test wins and won the day by 1 minute and 4 seconds over her closest rival, Emma Milesvic. Gardiner mentioned, “ I really didn’t know what to expect on todays track, as it was really rough from the Pros and quite high speed. I’m really happy to be able to hold it out front for a double win this weekend.”

Jeremy Carpentier had a better day on Sunday to ride to a 10th outright on the Pro track and 6th in the E2 class. Jeremy preferred the technical track although still managed to have 4 little crashes throughout the day. Jeremy signed, “ I know what I need to work on for the next rounds and really looking forward to having the time to get back to where I know I can be!”

Danielle McDonald also continued her fine form as Jess winning 5/6 tests in the Junior Girls category. Something tells us Jess has found her perfect protégé! Danielle rode exceptional all day on her YZ85LW. Danielle innocently stated, “ I wasn’t having the best day as I had a few crashes although I was still winning, which is pretty awesome. I really enjoyed my time with the team this weekend and can’t thank Jess and Jeremy enough”. Overall a very successful weekend for the team in the season opener!

The Yamaha MXstore Ballards Offroad Team will be racing in 3 weeks at Dungog, NSW for round 3 and 4 of the AORC.

Keep up to date with the team until then via their social media accounts:
@yamahamxstoreballardsoffroad
@missjessgardiner
@jeremycarpentier44