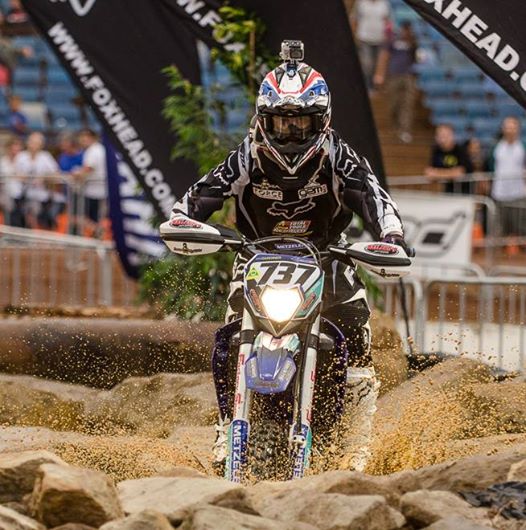 Round 2 of the KTM Australian Enduro-X Nationals at Parramatta Speedway in Sydney was a damp and slippery affair. The course was far more demanding than the first round and riders were challenged with a multitude of technical sections and greasy conditions.

Ballard’s Motorex rider Jess Gardiner was confident coming into the event after her first round win. The Womens class was two heats followed by the final. Jess secured the holeshot in both heats but was brought undone by the Fox Rock Garden in Heat 1. Dropping the front wheel into a hole allowed talented trials rider Kristie Mckinnon to pass and relegate Jess to 2nd place.
In Heat 2 Jess stormed away and led for the entire race posting the fastest lap times by over 20 seconds and won the race by three quarters of a lap. Having the best cumulative time gave Jess first pic of the gates for the final.

Once again Jess showed the speed and style she in renowned for and took the holeshot and maintained the lead until she went down hard in the rock pile, wedging the bike after jumping up into the rock section. As Jess was getting the bike upright another rider slammed into her taking Jess down again. In the melee, Tayla Jones had taken a commanding lead and Jess was forced to throw caution to the wind and push hard to make up time.
With the final shortened to four laps, Jess was steadily making ground until a slippery log cost her vital seconds. On the last lap Jemma Wilson and Jess connected and both went down just before the finish line. Jess was the first to remount and crossed the finish line in 2nd position behind Tayla Jones. Despite finishing second Jess still posted the fastest lap time of 1:09 – five seconds faster than Tayla.

It was a special day for Jess with her employer and sponsor JK Williams hiring a corporate box for employees to watch Jess race.

Jess had this to say about the event. “I might not have won tonight but I had a great time, it was awesome to have so much support from the spectators including the staff from JK Williams and a huge contingent of family members. I don’t think I have ever had so many attend a race before! I am starting to get the bike sorted and it was great to have GB here. When I wasn’t racing I had so much fun connecting with fans, I am really looking forward to doing it all again in Melbourne!”

The final round of the Australian Enduro-X Championship is Sunday the 2nd of March at Calder Park Raceway.