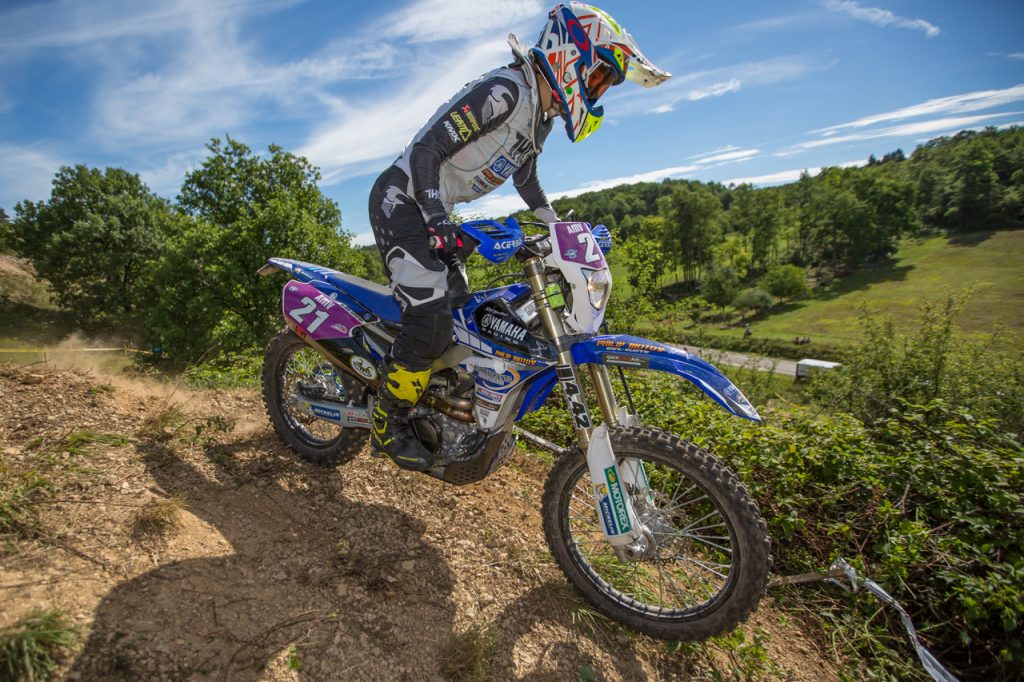 The third stop on this year’s Championnat de France d’enduro headed to Bar-sur-Seine, a French commune in the Aube department in the Grand Est region of north-central France last weekend.

After taking four wins from four starts in this year’s Championnat de France d’enduro, Rider Camp Yamaha’s Jess Gardiner entered the third round of the series with a twelve point championship lead over her nearest rival.

Once again, Gardiner was unstoppable in the heart of the champagne vineyards taking the overall win on both days which now sees her taking six wins from six starts.

On Saturday, Gardiner was in a class of her own finishing in the top position in all six tests. While she did reign supreme by winning the day with a total time of 29min58.170, 56.643 seconds clear of Samantha Tichet, she did admit that the first test started a bit “awkward” for her. However, Gardiner managed to get moving and enjoyed a consistent run for the rest of the day.

“Overall it’s been another good day for the Rider Camp Yamaha team and myself,” said Gardiner at the conclusion of the first day.

“The tests today were quite nice, but a little bit different than normal, as well as the three special tests which made things quite interesting.”

Gardiner explained that the first test, which was like an enduro test, involved a lot of things in it to be able to go fast, as the track had a few little jumps thrown in there for good measures. The Second test was like a ‘mini extreme’, as it was quite fast with one little uphill section, which Gardiner regarded as a lot of “fun”.

The third test however was quite technical with a lot of off cambered corners on a grass track which had a lot of tree roots which was good training for the upcoming ISDE (International Six Days Enduro) according to Gardiner.

“The last test is similar conditions to what we will have at the ISDE. So today has been good ‘trial run’ ahead of the ISDE that’s for sure.”
IMAGE: Mastorgne Photography

Gardiner dominated the second day on Sunday to move to an ominously comfortable lead in the title standings which saw the 24-year-old once again winning every single test throughout the day.

This time however, Gardiner had another battle on her hands which was mother-nature as it poured with rain, a lot!

Gardiner described the trials as “super slick”, but that did not stop her from romping to a 59.701 second victory, again beating Tichet.

It wasn’t all smooth sailing for Gardiner. On the trial section between the first and second test she lost front end of her Yamaha WR250F, in fifth gear, on an off camber rocky corner which resulted her in hurting her elbows.

“Today was a tough day, that’s for sure,” said Gardiner at the end of the day.

“It didn’t make things easy with the weather as well and the get off I had in between the test sections, but that’s just part and parcel in motorcycle racing.

My goal today was to try and win by over a minute, which we almost got there. The main thing is we leave Bar-sur-Seine extending our championship lead which is the main thing.

“I have to once again give a massive thanks to the whole of the Rider Camp Yamaha team for their efforts this weekend. Our Yamaha WR250F and Michelin tyres once again proved to be the best package to be on this weekend, both in the day and in the wet conditions. Also thanks to all of my other sponsors who are right behind me this year and making this year possible.”

Gardiner admits her confidence is sky-high as she chases a maiden French Enduro Championship.

“We’re just trying to make the most of each round we come to. I’m feeling good but we don’t want to change too much. We will just keep pressing on and work towards our goal, which is winning the championship,” concluded Gardiner.

Gardiner now heads into round four of the Championnat de France d’enduro with an eighteen point lead in the series. The fourth round heads 735km south to Réquista in southern France on 16-17 September.

Next weekend will see Gardiner lining up for the third round of the FIM European Euduro Championship which will take place in Burg, Germany, before turning her attention to the 2017 FIM International Six Days Enduro which ignites into action on the 28th of August which will be held in Brive-la-Gaillarde, France.